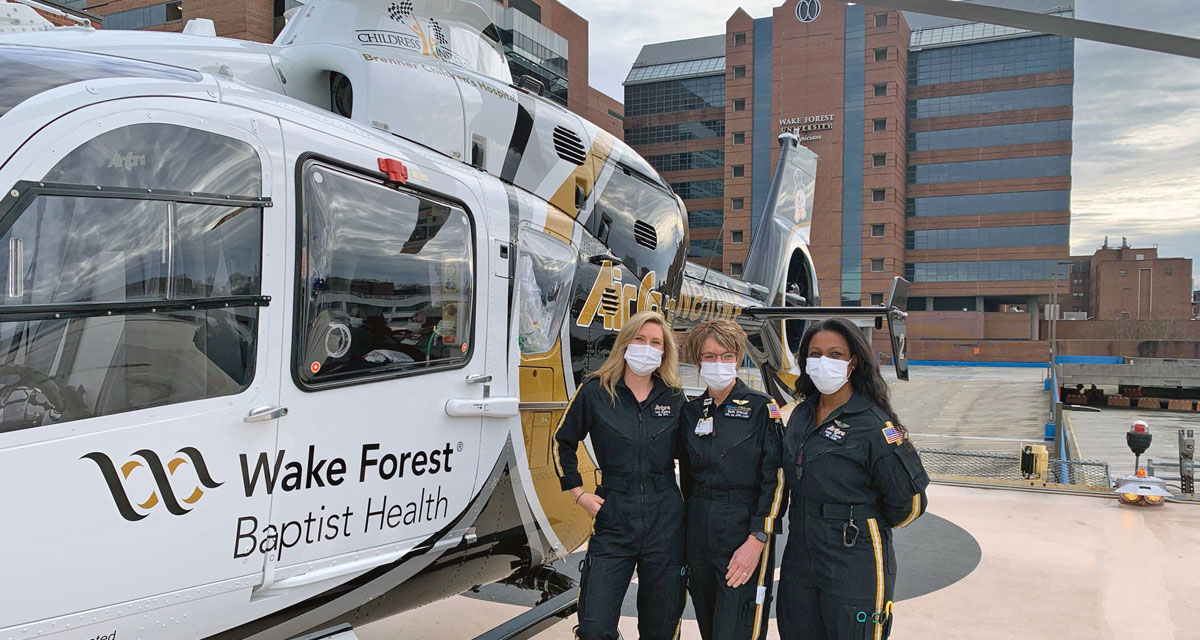 Since 1986, AirCare at Wake Forest Baptist Health has flown approximately 40,000 patients, helping them get the trauma and critical-care services they need.

The work AirCare at WFBH does is crucial, because statistics show patients who receive treatment within an hour after a traumatic injury have up to a 20-percent higher chance of survival. AirCare is a part of an EMS network serving patients in North Carolina, Virginia, West Virginia, Tennessee, and South Carolina that responds to the scene of a trauma incident and transports anyone who is injured or needs care to a medical facility suited for trauma. AirCare treats adults and pediatric patients with a variety of conditions, including trauma, cardiac, stroke, and burns. But there’s more to AirCare at WFBH than the services provided; those who care for the patients transported are dedicated medical professionals.

For Beth Driscoll, “busy,” “stressful,” “unpredictable,” and “challenging” are words she might use to share her experience in a nursing shift with AirCare, and words that led her to the clinical pathway and her role in AirCare at WFBH. “My senior year of college, I worked in the emergency department and experienced the coordination of a medical team on the ground and helicopter transport, when a patient with severe injuries after being struck by an airplane propeller was transported to the hospital. The challenge of providing critical intensive care to patients in a transport environment became the nursing focus I pursued. My goal of becoming a critical-care transport nurse didn’t happen overnight. Years of nursing experience and many rotations through various clinical areas as well as required certifications were necessary. I was fortunate to spend 20 years at UNC Hospital in Chapel Hill with the Air Care Pediatric/Neonatal Transport Team before moving to Winston-Salem, NC, to continue my nursing career, transporting the critical neonatal and pediatric population with Brenner Children’s Critical Care Transport Team. While no day is ever the same, there’s always an opportunity to be of service to patients and family members in their most vulnerable time of need,” said Beth.

Krisi’s mom has been an RN her entire life and inspired Krisi to follow in her mom’s footsteps. “I became an LPN in 2002 and worked in a telemetry floor and the emergency department in a small community hospital in my hometown of Long Beach, CA. I returned to school and received my associates’ degree in nursing in 2005; a year later, I became an RN, rotating in medical, surgical, and cardiac ICUs. In the summer of 2013, I married my husband, a native of Winston-Salem, and we moved here. I was hired for a position in the Trauma ICU at WFBH and was then hired in June 2017 to be on the critical care transport/air medical services, which has always been a dream of mine. After I did my ride-along in the ground ambulance and then from an airbase, I knew I wanted to be part of this team. I am one of the full-time nurses at our AirCare 3 base, located in Martinsville, VA, and occasionally I work at our AirCare 1 base, which is in Lexington. Not many people can say they love what they do, but I do!  I work with some of the most amazingly smart, talented, witty, caring, and brave human beings on the planet that I get to call my partners. There’s nothing more rewarding than serving your community, and my husband, a firefighter for the city of Kernersville, and I both love what we do, those we help, and the people we work with daily,” Krisi commented.

Since the age of 12, Kate knew she wanted to work in emergency medicine. “I have always been intrigued by medicine and was drawn to the excitement and diversity of emergency medicine. I decided to start in EMS with the intent to transition into emergency medicine. I graduated from an Associate Degree program and began working as a paramedic at 19. With an interest in furthering my knowledge and the scope of practice, I was drawn to AirCare. I love that we care for all types of patients and learn about all specialties in medicine. The AirCare team works together to get the helicopter ready for our patients’ needs and on any shift, we could be requested to transport critically ill or injured patients from smaller community hospitals to WFBH, as well as being requested to fly directly to the scene of an incident for patients that require more rapid transport. Becoming part of this amazing team included studying and preparation, leading to my board certification as a flight paramedic. In addition to my work with AirCare for the past two years, I am currently a full-time nursing student, graduating this May, working toward serving AirCare as a cross-credentialed Paramedic/RN. I can’t imagine doing anything else,” stated Kate.

The AirCare at WFBH provides a unique medical service bringing critical care support to communities and people in their most vulnerable times. Although you hope you never need the services of AirCare, it is good knowing they are part of our community.

Carolyn grew up in Pfafftown and has been with Forsyth Magazines since 2006. With degrees in communication/journalism and psychology from UNC-G, she enjoys writing stories about local people and businesses making our community better through their efforts. Carolyn is passionate about helping animals and has four rescue dogs of her own. In her ‘regular’ job, Carolyn is a territory sales manager for a pharmaceutical company and has been in the medical industry for over 20 years. Carolyn enjoys spending time with friends, working out, specifically spin class, gardening, baking, and cheering on her Georgia Bulldogs. She is most at peace on a beach with her toes in the sand, reading a good book.
View More Articles
PrevPrevious ArticleMason H. Hunter Vocational Educational Scholarship
Next ArticleA Life-Changing Combination Atrium Health, Wake Forest Baptist Health Join to Improve Care for AllNext